Eyeing for your next dog companion? Surely, the qualities such as being affectionate, energetic, and loyal are on top of the list when it comes to considering which dog breed to go for. Honestly, the Boston Terrier and the Beagle might just fit the mold for you!

They might have a stark difference in appearance, but many dog enthusiasts would agree that they are great as pets. The dilemma of choosing between the two has ended when the Boglen Terrier emerged- a crossbreed of the Beagle and the Boston Terrier! But if having a mix is not your preference, you can look through this article and find out which small dog is perfect for you.

The Boston Terrier comes from the United States of America. It was through Robert C. Hooper and his actions that this breed was actualized. What transpired was that Hooper purchased from Edward Burnett a dog named Judge who had a lineage of the bull and terrier types. Later on, Judge sired a litter from Burnette’s gyp who was a bulldog-type female.

The crossbreeding was subsequently refined by several enthusiastic breeders until they have come to the kind of Boston Terrier we often see today. One significant change on this canine is a downsize of 12-25 pounds from its original 44 pounds weight.

The exact place where the beagle came from remains a cloudy history for centuries. Even Beagle lovers and historians have doubts about where its name came from. Some experts say that the term means ‘little” from the Gaelic word ‘beag’ while others speculate it to be a French term for the sound hounds make whilst hunting known as, ‘be’geule’.

Despite the mystery and several conjectures of this breed’s origin, documents have shown small packs of hounds mainly serving the purpose of hunting down rabbits and hares in England way before 55 BC. An English Authority even established the Beagle as the “foothound of our country, indigenous to the soil” which probably led many to think that the Beagle comes from England.

Don’t be duped with the Boston Terrier’s small size because, despite his compactness, his build looks and feels strong, sturdy, and muscular. He has a symmetrical look with his head typically square and eyes close to an almond shape. His muzzle is short which gives him a cute but serious appearance and the whole look is paired with two floppy ears. Some owners opt to crop their Boston dog’s ears for aesthetic purposes. Meanwhile, he may come in coat colors such as brindle, black, or seal.

The Beagle is a medium-sized hound possessing a well-proportioned body. By standards, this pooch is expected to have a set of expressive eyes, long floppy ears, and a distinctive dome-shaped head. When his tail stands straight, the white and usually fluffy tip resembles a white flag. Overall, The Beagle should look like a Foxhound but in a smaller package. As for his coat colors, they can come in an assortment of shades and patterns such as the classic tricolors of black, tan, and white.

Dubbed as an American Gentleman, the Boston Terrier is very individualistic. The common personality you’d notice from this dog is either he is clownish, placid, or high-spirited, but overall, most of this kind are charming and very neat-looking. This dog is family-oriented and he usually gets close to one specific member. He is sensitive as to how his owner feels, making him the best pet to get for the elderly.

This cheerful breed gets along very easily with kids and other pets. With his pack mentality, the Beagle prefers to have company on whatever he does. If he’s left alone for too long, he’ll display signs of separation anxiety. Also, the owners of this dog can attest to how entertaining he is. He is a happy pill for many as he does mischievous and quirky exhibitions.

What fills the small body of the Boston Terrier are enthusiasm and intelligence. Being that he gets very much in love with his owner, positive reinforcements work wonders. Mainly, the Boston Terrier dog loves to do mental and physical activities as he perceives this to be a way to get even closer to his human. Obedience training, housebreaking, you name it- your Boston pup will always crave mental stimulation.

When it comes to training, Beagles are often unamused by it. Their independence and stubbornness clearly show no matter how hard you try to get him to learn how to sit or stand. Even if you ask him to give him your paw, you’ll only end up staring at a judgmental face. Since they aren’t keen to please their owners, using food as an incentive will drive them to participate in the session. Early socialization must be incorporated at an early age as well to ensure that he becomes approachable in case you get a new pet in the future.

A minimum of 30-60 minutes of exercise daily is enough for the Boston canine. Commonly, he is very inactive indoors and he can’t do well if he is housed outside. Moreover, his docile nature regulates his energy level which means, a simple walk in the park or a quick game in the yard will suffice for this small dog.

Beagles are more active and energetic although they averagely require the same amount of exercise as the Boston Terriers. Giving him outdoor activities can keep him happy but ensure that he is in a fenced yard. His curiosity level and thirst for escapades paired with a strong sense of smell can lead him to many places, thus a possibility of him getting lost. His exposure both indoors and outdoors has to be supervised to avoid him from getting bored as well.

His small size and indoor personality make the Boston Terrier a great apartment dog! However, if he’s untrained, the excessive barking may take place thus annoying the neighbors. Additionally, this dog is flexible and can live a farm life. As for climates, the Boston pooch can’t do well in extremely cold weather. Even in a temperate climate, exposing him outside for too long is not advisable.

As long as owners don’t forget to take their Beagles outside for their exercise needs, apartment-style living will suit them. Whatever type of weather there is, Beagles will plead that they should still be brought outside. One thing to take note of, however, is to keep them from extreme temperatures or else, these will take a toll on their bodies in the form of frostbite, hypothermia, or sunstroke. 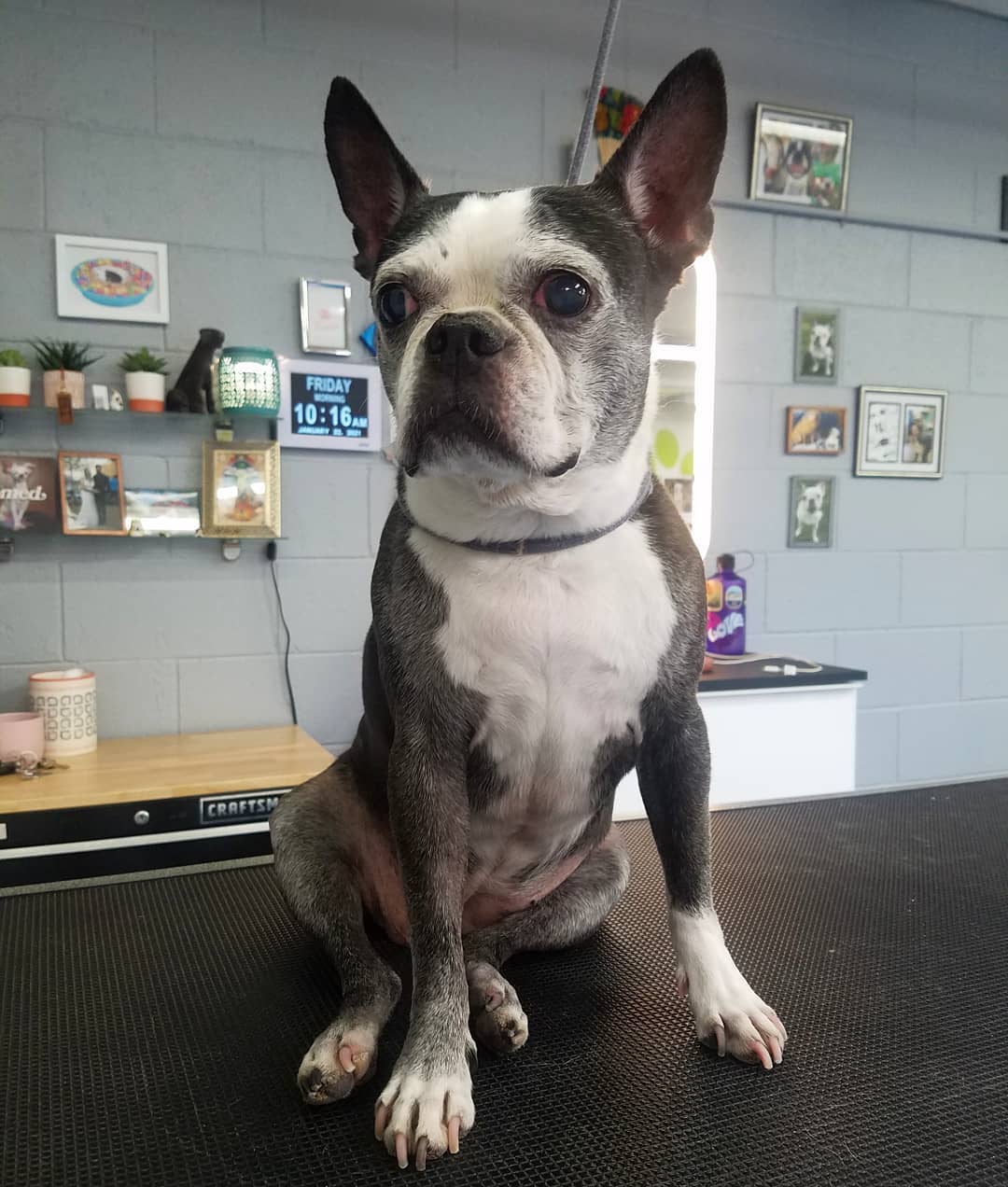 All year-round, the Boston Terrier sheds moderately. It is during winter when he develops a thick coat while summer is his shedding season. This is the same period when you have to ready your medium-bristle brush to combat your dog’s excess hair fall. Other tools such as the hound glove or rubber grooming mitt can be used too, depending on which is more convenient. Baths are only needed if he gets dirty or if he produces a foul smell. The rest of his body has to be regularly checked for any signs of infection.

Boston Terriers are generally healthy as they can live anywhere between 11-13 years. In rare cases, the breed might experience health problems due to its facial structure. Just like any dog breed, checking the history of the parents before purchasing a Boston Terrier puppy is compulsory.

Some of the illnesses that can wreak your Boston’s well-being are the following:

Responsible Beagle breeders thoroughly screen their breeding stock to guarantee potential dog owners that they can have a fit and long-lasting companion. Even though Beagles, in most cases, are healthy, some can still be prone to health issues such as:

Both an average-sized Boston Terrier and Beagle adult dams can give birth to 6 puppies. They both also have a normal gestation period of 63 days upon conception and can reproduce two litters a year.

The Boston Terrier’s popularity reached its zenith in the mid-20th-century while it consistently ranks 21st according to the American Kennel Club (AKC). It is his family devotion, loyalty, and playfulness that makes him very well-known to families with younger kids thus making him one among the few American favorite breeds.

As expected, the Beagle breed remains 6th in AKC’s ranking of breed popularity. Right at the start when this dog was recognized in 1885, people from almost all parts of the world went gaga over the Beagle. Until now, this merry canine never fails to get on the top 10 when it comes to demand.

Getting your Boston Terrier a dog companion can help improve his social skills. Although he is already naturally sociable, having company can keep him from developing anxiety if he’s often left alone for long periods. The list below will show you specific breeds that can get along with him very well, but take note that each dog is unique and that certain factors can still come into play regarding compatibility:

A Beagle owner who’s planning to get a second dog either from a reputable breeder or a rescue shelter can have an infinite list of breeds to choose from. Given that the Beagle has a temperament ranging from playful, friendly, to having a pack mentality, a new addition to the family is not going to be a problem! Here are some dog breeds you can check out:

Your lifestyle dictates which dog suits you best. Beagles love to be taken outside regularly where they can roam around in dog parks or simply play a game of fetch in the yard. Boston Terriers on the other hand like to stay indoors at the comfort of their home with their loving owners. Whichever of the two you decide to get, you are sure to have a great addition to your ever-expanding circle!