The Boxer, Pointer, Great Dane, and Bull Terrier are just some of the breeds that make up a Dogo Argentino. They all have significant contributions, resulting in a valiant-looking and even-tempered Argentinian Mastiff.

This all began with the efforts of a certain Argentinian doctor. Indeed, his achievements have paved the way for the successful introduction of a new dog breed around the 1920s, which we now know to have remarkable traits.

But what are these traits, and where did they come from, specifically? We’ll learn all that by discovering what runs in the Dogo Argentino’s blood. Keep reading!

Who Bred the Dogo Argentino?

Dr. Antonio Nores Martinez and his brother were the ones who started it all. They have already exhibited an immense passion for dogs at a young age. They are great helpers, too, as they’ve borrowed, fed, and healed the skinny dogs in the region of Santa Isabel during one summer.

These pioneer breeders have even expressed in their last will how much they want to pass away with a Dogo Argentino under their bed and with a grave that’s covered only by a rough cross and a Dogo Argentino figure that guards them while they’re on their permanent sleep.

The Martinez brothers’ passion had made them translate a dictionary, the ‘Notre ami le Chien’. This was one of the great sources they have for any dog-breeding knowledge. Should they want to learn anything about any European breed, this is where they go.

On another note, the brilliant Martinez brothers are the sons of a university professor and a surgeon, whose library was filled with anything that could spark anyone’s interest in various topics, such as the origins of certain dogs.

Why Was the Dogo Argentino Bred?

Dr. Martinez and his brother have shown eagerness to create a new canine breed. The goal was to come up with a competent dog for hunting and strong enough to deal with just about anything they meet during the hunt.

They have particularly listed some of the expectations from the dog, which are:

What also prompted them to craft a magnificent dog was the failure of several European hounds, which showed to be no match to the size and strength of the wild boars in Argentina.

It was during the early years of Dr. Martinez when he first manifested about using the now-extinct ‘Viejo Perro de Pelea Cordobés’, otherwise known as the Fighting Dog of Cordoba, as a basis of the canine breeding.

The Cordoba dog was a descendant of the following dogs, which some were brought to America by the colonists:

The main idea for creating a new dog breed was to retain the extraordinary fighting spirit and courage of the Cordoba dog while involving other traits present in other dog breeds to improve the following:

Of course, along with this is the effort to reduce or eliminate the aggression or the ‘fighting among themselves’ instinct which can hinder the success of pack hunting.

It’s not excluded as well that the dog is family-friendly. To put it simply, they have to be a primitive breed that’s useful in doing tasks.

9 Breeds That Make a Dogo Argentino

Recognizing that not all pleasant traits can be found from one sole breed, Dr. Martinez has planned out which breeds to use aside from the Fighting Dog of Cordoba to come up with a Dogo.

Here are all the 9 key breeds for the Argentinian dog:

The Boxer has contributed their agility and tractability to the new canine breed. One of the Boxers that had a fair amount of contribution to the Dogo was that which was owned by Dr. Enrique Martinez, the breeders’ uncle.

In the pursuit of having a hunting dog that excels at it, an improved sense of smell is a no-brainer needed addition to the traits of the Dogo. Hence the Pointer was involved due to their scenting ability.

One of the first Pointers used in 1927 was Zug de Tregroas, an import from France by Miguel Arrambide, an engineer. There was also a female Pointer named Hantippe. Both were of superior lineage as they were French and European champions both in work and structure.

The harlequin Great Dane was responsible for adding the ideal height of the Dogo Argentino. The first Great Dane that did the shaping of the new breed was named Ney, which Dr. Martinez’s father owned.

The height perfectly complemented the rest of the characteristics of the Dogo, later on.

The Bull Terrier’s contribution was mainly the white coat which has become the Dogo’s identifiable trait or the breed’s hallmark. This includes as well the occasional pirate patch that’s allowable only if it shows in one of the Dogo’s eyes. It has to come in black only and shouldn’t be too large in the area on the face.

Ideally, the patch shouldn’t exceed 10% of the entire dog’s face.

It’s important also to mention the Mastiff, which, along with the Boxer, Bull Terrier, and Bulldog, has shaped the Old Cordoba Fighting Dog. Since the Mastiffs are known for their fierceness, it’s safe to assume that this temperament was also passed down to the Dogo.

Whenever the early Dogo Argentinos appeared to lack decent height, the breeders would usually use the Irish Wolfhound, which is a giant dog.

Having read the description and the qualities portrayed by the Dogue de Bordeaux, Dr. Martinez had decided to include the breed in developing, even more, the Dogo Argentino.

However, it was a challenging start as the Dogue, a French Mastiff, was difficult to find in Argentina. Luckily, they end up finding one. This breed gave the Dogo a strong jaw, a good height, and a good head.

Due to their yellow tinge, which was very difficult to eradicate, the Dogue was used conservatively.

Just like the Great Dane and the Irish Wolfhound, The Great Pyrenees’ main contribution was their height. A short Dogo Argentino would mean a prompt to use such a giant dog for a more desirable height proportion.

The last one to contribute to the creation of the Dogo Argention is the English Bulldog. At least 4 Bulldog lines were running through the veins of the Dogo.

The three of them had white coats, albeit the other one wasn’t pure, and the other was brindle. They gave the Dogo Argentino the powerful jaws and the indomitable courage.

This noble breed also has the tenacity to fight, which was useful in creating the new canine breed. There wasn’t an extensive use of the Bulldog since the Cordoba already has it in their bloodline.

Also, the Bulldog is known for their underbites called prognathism and small size, which aren’t practical in the making of the Dogo Argentino. 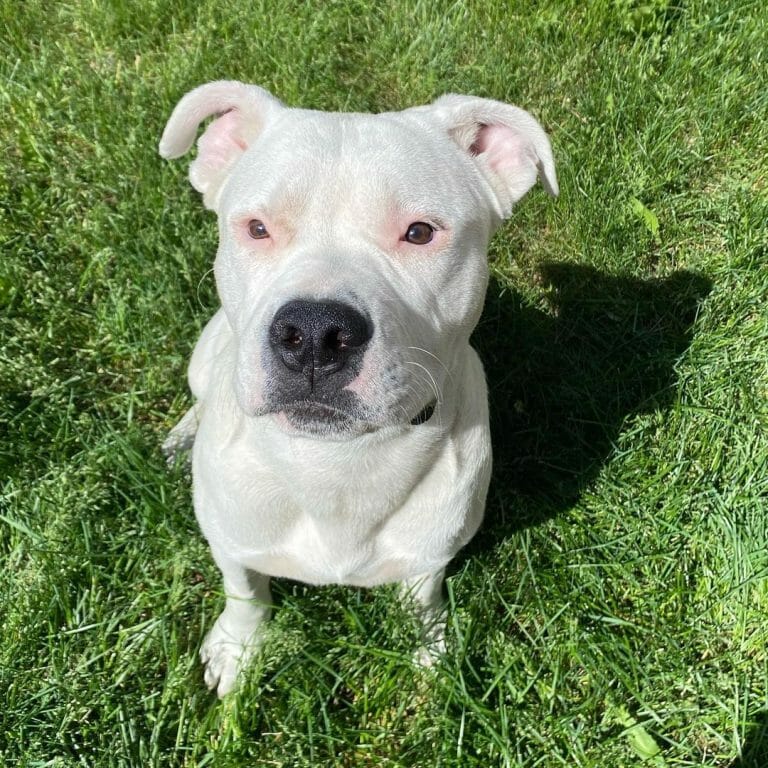